Well, this weekend we had intended to take Karisma on Penarth Marina’s second cruise in company, to Bristol via Portishead. However, we had some urgent family stuff to do so had to cancel. Never mind! I still haven’t put up the pictures from our trip around the Isle of Wight in the J.P. Morgan Round the Island Race two weeks ago.

Myself, Jenny and Fionn joined the ever-magnificent Gipsy Moth IV in Cowes for a day of training on the Friday followed by the race day itself on the Saturday. The crew comprised ourselves, a father and son duo John and Barry Scott, Phillip, and the UKSA skipper Ian Clover and our old pal Dick Saltenshall. John and Barry co-owned a Twister whilst Phillip had long ago completed his Yachtmaster, so an experienced crew set sail- notwithstanding the age ranges, with Fionn a lazy 9 and Barry a sprightly 84 years old respectively!

Our first day began with readying Gipsy for sea before Ian asked Fionn- who else! to take her out of the Medina and west towards Osbourne Bay.

After a morning’s sail we anchored in Osborne Bay for lunch where we were buzzed by a few boats coming to get a close look at Gipsy Moth. Ben Ainslie, however, kept a respectful distance, but that didn’t stop Fionn getting a snap. Well, we weren’t likely to see him on race day!

Race day itself dawned bright and sunny, and there were just a few boats on the water as we exited the Medina. We raised sail and headed for our waiting area anticipating an 08:30 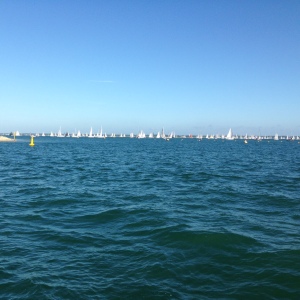 Boats assemble off the Royal Yacht Squadron for the start

start. However, the gun sounded for our class (Classic sailing yachts over 9.6m in length) at 08:20, and we were off! Gipsy soon got into her groove- which means, in her particular case, heeling at 40 degrees with the leeward rail almost awash- and we settled into a long beat down the western Solent.

After what seemed like an age of close-hauled beating, we made it through Hurst narrows and into the Needles channel. As a scratch crew we weren’t expecting great things of our beautiful old lady, and as we were sailing in company with some very small boats it was fair to say we weren’t exceeding expectations! anyhow, we rounded the Needles in company with some very beautiful folkboats in a lively blue sea. 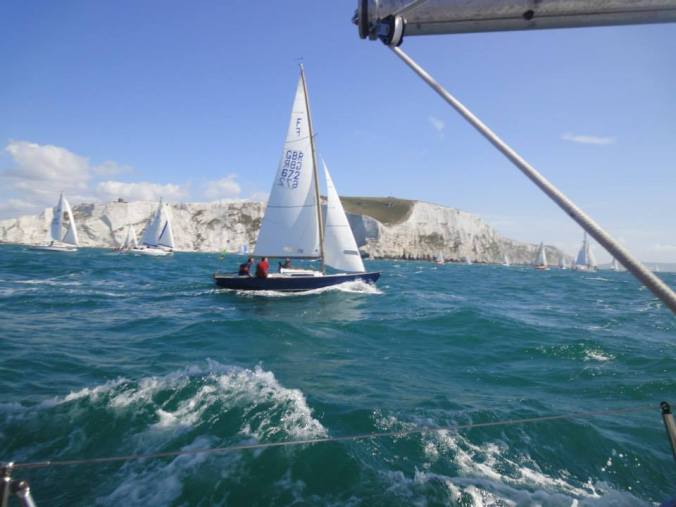 The remainder of the race was a broad reach past St Katherine’s in glorious sunshine and a lively one metre or so of sea. The yachts around us were certainly enjoying themselves and Gipsy galloped along, with her stern lifting gracefully to each passing wave.

At this point, Fionn decided he would join Phillip on ‘foredeck duty’- also known as lolling about and trying to get feet or hands (or both!) in the stream of water rushing by.

After 9 hours, 43 minutes and 17 seconds we crossed the line at Cowes (with Fionn acting as official time recorder). Barry’s secret- that the day was his Birthday- was out, and Ian asked him to helm Gipsy over the line.Gipsy finished 25th in class- the 1,107th boat of 1,393 boats to cross the line.

David Dimbleby and his Heard 28, Rocket, return to the Medina

As we motered back into Cowes, we had one last little surprise, as we passed a pretty green gaff cutter. I recognised the name- Rocket- and realised that this was the boat which starred last Autumn in BBC1’s ‘Britain and the Sea’; moreover, that she is owned by presenter David Dimbleby. A quick peer at her crew confirmed that it was indeed the man himself at her helm.

In company with Rocket, Gipsy motored gracefully up the Medina and we returned, tired but happy, to our digs in Fishbourne- and a thoroughly deserved bottle of cold champagne. Will we be back next year? you bet!

One final note: I haven’t found any pics from third parties of Gipsy in the 2015 race, but a search of the RTIR website did turf up a pic of Gipsy in the 2013 race, with yours truly at the helm! not a bad snap, even if I do say so myself.