By way of compensation for my silly mistake with the passport, we went for a family sail on Sunday. We had intended to cast off sharp at 9am, but, as we didn’t actually wake up (at

home) until 9am, a whole day out in the channel was off the radar. Instead, we took Karisma for a rip around the bay. The forecast was light to negligible, and we had variable winds between two and about nine knots; but with the full rig up and lots of sunshine we sailed some really good reaches across the bay. With Jenny and Fionn on the tiller I was able to fiddle about with the sail trim- more twist here, less twist there. Ultimately we were able to eke 5.3 kn of boatspeed out of the wind, which wasn’t bad at all.

the P20. We had a cup of tea with the Chapmans, new owners of the Bavaria 32 Toro Tsa Rona, before we crossed the rubicon that was the first trip in Karisma’s new dinghy.

Yes, the dinghy. For the previous 3 seasons we haven’t had one. They’re not terribly necessary in the upper part of the Bristol Channel, because the tidal ranges are so huge that there are no tenable overnight anchorages and all destinations are locked marinas. However, hoping to go further afield this season, I decided one would be handy.

Having looked around the (new) options, I wasn’t too impressed. Most of the no-brand dinghies offered by chandleries around the £400 mark seemed very bulky and heavy and not terribly well built. What I really wanted was an old-school Avon tender in the 2.5 m size. But of course, Avon don’t make these anymore. However, in April somebody on the ybw.com forums was offering an Avon redstart, complete with outboard bracket, spraydeck and oars, well used but with no holes or patches, which is the key thing for a probably 30-year-old inflatable boat. I snapped it up at a not too cheap £240 and the seller even managed to get it driven down from Conwy to Cardiff.

Now I may have a competent crew certificate that claims I am able to ‘row a dinghy in a circle around the yacht’, but I’m buggered if I’m doing that sort of thing to get ashore. A motor was wanted, and we picked a 18 year old one up in Wolverhampton from Steve Evans, an engineer who specializes in reconditioning only Honda 2hp outboards. If you are after a little outboard motor I recommend this guy- fantastic service and advice with a warranty on each engine he sells. We paid £250 for the engine which gave us a tender and motor combo for far less than the price of a brand new outboard alone.

So, how would our new (combined age- near 50 years) dinghy and motor work out? Very well, as it happens. The motor had sat, waiting, on the back of Karisma for 2 months but started first time. The dinghy was dry as a bone and even coped with my not-inconsiderable weight. The only issue remaining is to secure the plywood floor slats (which I made myself as it didn’t come with any) a little better as they move around too much at the moment. Once it was pumped up and launched, Jenny and Fionn took the little boat for a spin around the Marina, which was a fab end to a fantastic day. 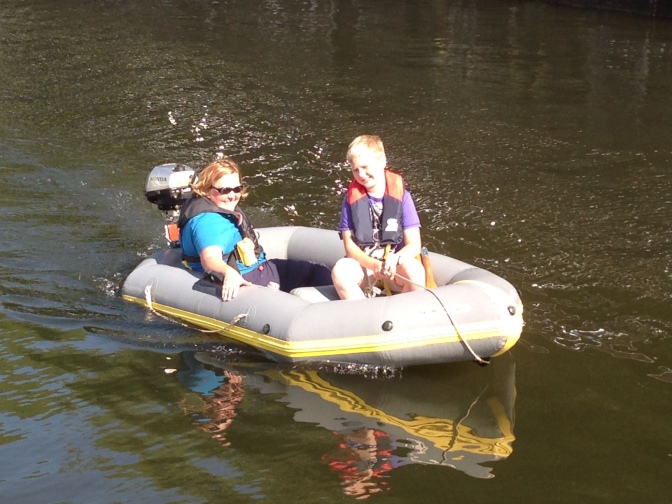