So my previous estimate of the return of the boat to the water was, er, a little bit out. Karisma finally hit the water on Thursday last week, after a little over seven weeks on the hard. We had an estimate for the turnaround of four to six weeks, so what went wrong? Well, firstly, the job somehow slipped between the cracks of the marine engineers booking system, and after three weeks of nothing happening a gentle reminder got the wheels turning again. This is not the first time, and it won’t be the last I suppose, that some marine job or other has ended up like this, with almost every contractor I have ever used (the noble exception being Sanders Sails). The replacement seacocks took some time to arrive, and once all the port-hand side skin fittings had been changed (loo in and out, plus the sink outlet) it was discovered that the boat had been positioned in her shore cradle with a pad over the galley sink fitting, which is on the port hand side. Looking at it, it’s hard to see how it could have been put in the cradle any other way, but the way the cradle was built meant it was impossible to prop it either side and remove the cradle pad without cutting it off in some manner. This meant that the only way of finishing the job was to lift the boat with the travelling hoist, and here we ran into the real problem, which was that the marina had sent the travelling hoist away to the docks area for a load of welding in the middle of the summer season. Given that most people launch in April (or thereabouts) and come ashore in October (or thereabouts), and few people want a boat hoisted in December or January, you might think that wintertime is a good time to service a hoist, as through the active season there will always be a certain number of boats coming in and out. Digging further it transpired that the hoist was being serviced (or rather repaired) because of a “grinding sound” coming from the steerable wheels, and that it had already been serviced for something-or-other only a month earlier. We lost ten days waiting for it, but I suppose we should thank our lucky stars becuase once it had trollied all three tonnes of Karisma down to the slipway it tried to lift a nine-tonne boat (it is, by the way, rated to lift 13 tonnes, which is not really terribly heavy as boats go) and the hydraulics blew up, so nobody else got a lift that day. Chatting with the engineers they made the point that the hoist was costing them a lot of business and I can believe it. Reflecting on it all, I think the best thing to do is get on board with a bit of ‘marine manana’ when operating out west. The work done on the boat was excellent and the price maybe two thirds of what it would cost in Cardiff, which was a pleasant surprise at the end of the process, so I can’t complain too much. Plus, the boat is not now taking on water, which is always a Good Thing.

So we bundled outselves, Eira’s baby things, sleeping bags and all the rest of it into the car on Friday night and down to the boat we went. We ate in Martha’s Vineyard, the bar immediately above the marina offices, and I can highly recommend it- a great welcome and good food. High tide on Saturday was 12:30pm so we decided to go up-channel to the Jolly Sailor at Burton and pull onto their pontoon for lunch. Our berth had become a bit cramped- a large open area immediately behind us on the finger opposite has been occupied by a gignormous ?ferro or steel boat, but we got off the pontoon and away with a solid shot of reverse. Due to Jenny being needed to tend to and feed Eira, Fionn stepped up to serious deck work and excelled. We came alongside at the fuel berth to discover another boat using it as a waiting pontoon, and had to come alongside a little finger pontoon and wait for them to push off. Fionn did a great job getting the stern line onto a cleat in a tight space.

Once we had fuel we enjoyed the novelty of a freeflow lock out to the blue sunny waters of the haven. leaving Milford’s approach channel, we then had some genuine excitement as Fionn, moving onto foredeck duties, fumbled a fender overboard. Man Overboard practice ensued, and we had the off-fender back on board ten minutes later, having had to pick it up to leeward because it was blown so quickly over the sea surface by a wind of around 10 knots. Jenny proved an expert with the boathook.

With the wind in the west we ran up-channel on some deep broad reaches and training runs. Fionn took over headsail grinding duties; it was a good time to start when running downwind and not a lot of sheet tension needed. Generally, however, Karisma does not much like to be sailed so deep and the 10 or so knots of wind was not really pushing her along at more than four knots. This changed a little south of Pembroke dock where a jet of wind got us doing 6.2kn at about 150 degrees, which was probably the best downwind experience we have had with the boat. Of course, going downwind is something one never does in the inner Bristol Channel, so perhaps there are hidden depths yet to her performance!

Just before 1pm, with the tide already turned against us, we were passed by the Irish Ferries “Isle of Inishmore”- how many times have we watched boats sailing the haven from her decks, and wished it was us! – so we waved enthusiastically at the people on her decks, who waved enthusiastically back. I don’t know how many yachts bother to wave to the ferry, but we spend so much time on her visiting our family in Ireland it felt like the natural thing to do. By this pont we were off Hazelbeach, which has a pontoon and a pub (the Ferry Inn) and this seemed a better option than pushing on against the tide to Burton. We dropped our sails and motored onto the pontoon, having to take the windward side on account of a few small motorboats clustered to leeward. We managed to avoid a very unusual obstruction which is unknown in the inner Bristol Channel (someone swimming!) and came alongside in 4.5m of water. Comparing it to the height of tide, I figured that the pontoon dries 0.9m at its hammerhead, which fits exactly the estimate in the pilot book. Neat!

The Ferry Inn is a nicely appointed pub but, very oddly at 1pm for a waterside pub on a sunny Saturday afternoon, it was all but empty. In fact I had to knock on the kitchen door to get someone to dispense coca-colas. Being paranoid about making our first stop on a drying pontoon after high tide- and because it seemed rather a chore for the staff if you wanted to order anything- we made do with coke and crisps for lunch and pulled off an hour later. Of course, the water depth had dropped by only 0.3m; we have to get out of the Cardiff mindset, where metres of tide can come and go in an hour. 4.5m is a lot of water when the range is only 5m in the first place. 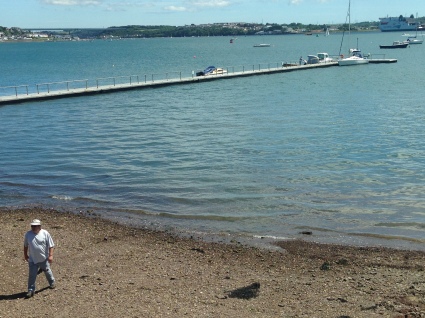 Looking at that blue sky it’s amazing to think that we set off after lunch into a wind gusting to 19 knots and under a completely grey sky. We cut our losses and motored back to Milford, taking a detour to peek int Gelliswick bay where our new yacht club is housed. The club’s dinghy regatta was in full swing, so we stayed clear of the racers and headed back to enjoy a Carribean-themed night- complete with pirates- and rather a lot of Chardonnay at Martha’s Vineyard.

Sunday was time to clean the boat, becuase after seven weeks under another earth bank  she had got rather grubby on deck. She now looks spiffing. 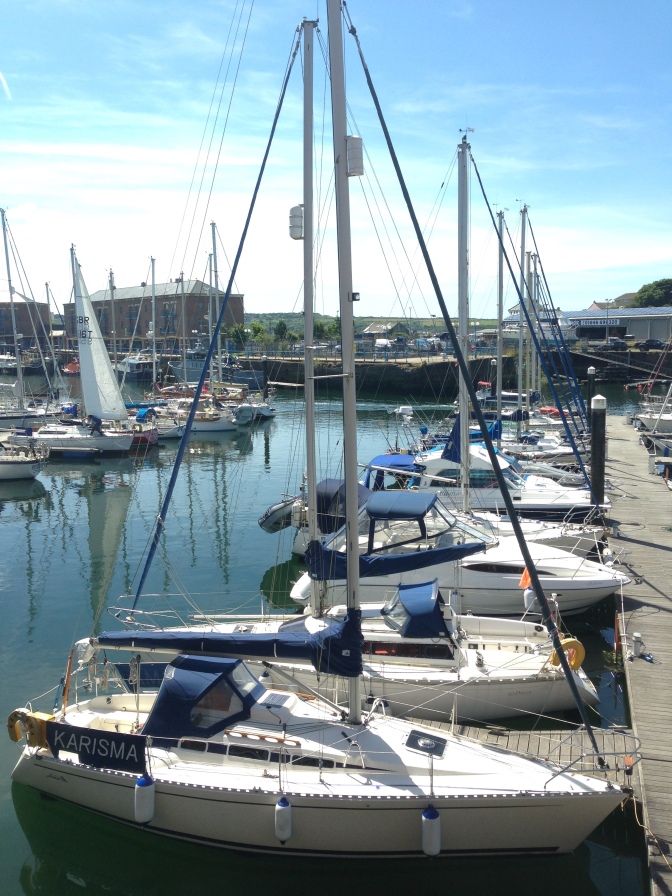 After all that work a decent lunch was in order so we headed over to Pembrokeshire Yacht Club just in time to see the dinghy regatta come to a close, with boats returning from a long-distance race around Dale roads. Fionn had a swim in the bay before his scampi and chips and the long road home. A perfect weekend, but the best bit? Well, we’ll be back for more on Friday night. Can’t wait! 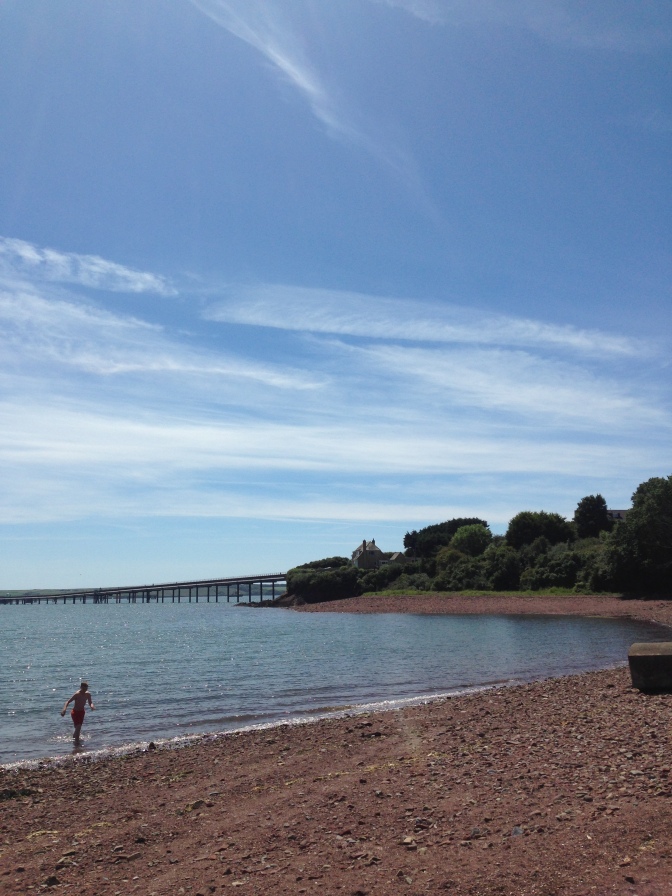