A couple of years ago when we had our new sails, I had the sailmakers make up a couple of leecloths for Karisma’s saloon settee bunks. I have always intended to fit them but somehow never got around to it. When we’ve previously spent a night on the saloon berths, the thing we noticed was that you become very aware of the ‘edge’ of the berth, and so tend to keep away from it and sleep uncomfortably- a situation that would be improved by turning the berth into a two-sided ‘crib’ with a leecloth. Morover, as we will have a new baby next spring, the idea of being able to create a secure, enclosed space in one of the berths appealed, so I thought I’d get on with it.

The cloths themselves are ordinary blue canvas, about 6ft (the length of the berth) by 2ft, with five metal rings with an internal diameter of about 15mm sewn in along each of the longer edges. This was how I’d had them made, with only the vaguest idea of how I’d rig them up, and I was struggling for ideas. Searching on the internet, a lot of lee cloths are made with a rigid pole along the top edge, bottom edge, or both, to enable fitting into end ‘cups’ or running in a grove rather like the front edge of a sprayhood. However I didn’t want anything rigid involved, for a couple of reasons: a) stowage space on Karisma is tight, and I don’t need to be thinking about stowage for two to four six-foot long rigid poles, and b) under no circumstances did I want the lee cloths permanently attached to the settee berths. The usual thing is to fold down the cloth under the bunk cushion when not in use, but all the tools and hardware are stowed in the under-berth lockers. To get to these things (which happens often), I already have to dig past the settee cushion and the dry-mat (anti condensation) layer underneath. If the lee cloths were stowed under there too it would make getting at things terribly cumbersome, so they needed to be completely removable and able to be packed down in a locker. It also would be handy if, when in use, the lee cloths did not prevent access to the locker bins.

I asked a question on the myhanse.com forum to see if anybody had fitted leecloths to a 301 before, but got no replies. However inspiration struck on the ybw.com forum when someone asked a question about using toggles- the sort you get on a duffle coat- to tie down a reef in a sail. Ureka! I could use toggles, pushed through the eyelets of the leecloths, to attach them to the GRP moulding beneath the bunk and, somehow, to the bulkheads above the berth. I ordered a variety of toggles from Ebay, not being sure exactly what size would be needed. In the end it turned out that 30mm toggles were needed to fit properly through the 15mm eyelets. I also ordered some 4mm shock cord to rig the cloths up with.

Firstly, I measured up and drilled five holes in the inner GRP moulding below the settee berths, behind the line of the locker lids. Through each of these I fitted a length of shock cord with a 30mm toggle on the end. The lines are long enough so that they stretch as far forward as the front edge of the locker bin lids. This means that a few inches of the leecloth will remain beneath the cushion when fitted, which is important for keeping some weight on the cloth and keeping it in place when you’re lying in the berth. 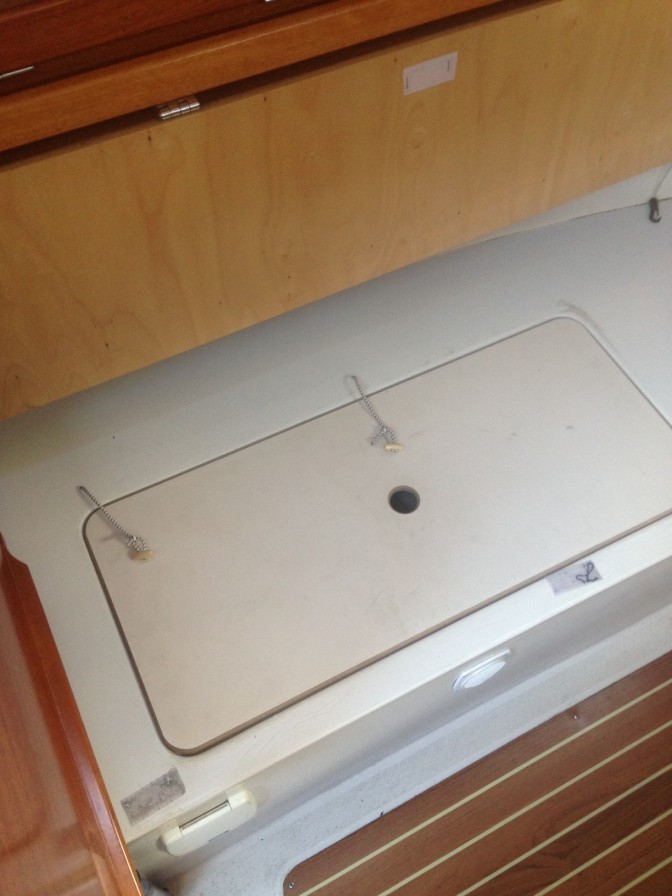 The lines are secured inside the lockers by another, larger (50mm) toggle on the end acting as a stopper to prevent the line and leecloth from pulling forward out from underneath the cushion (you could use plastic stoppers for this):

Here it is on the port-side berth with the toggles pushed through the lower eyelets of the leecloth:

With the bunk cushion back in place, the cloth is pulled out against the tension in the shock cord of the fittings so that about 2/3 of it is above the cushion. 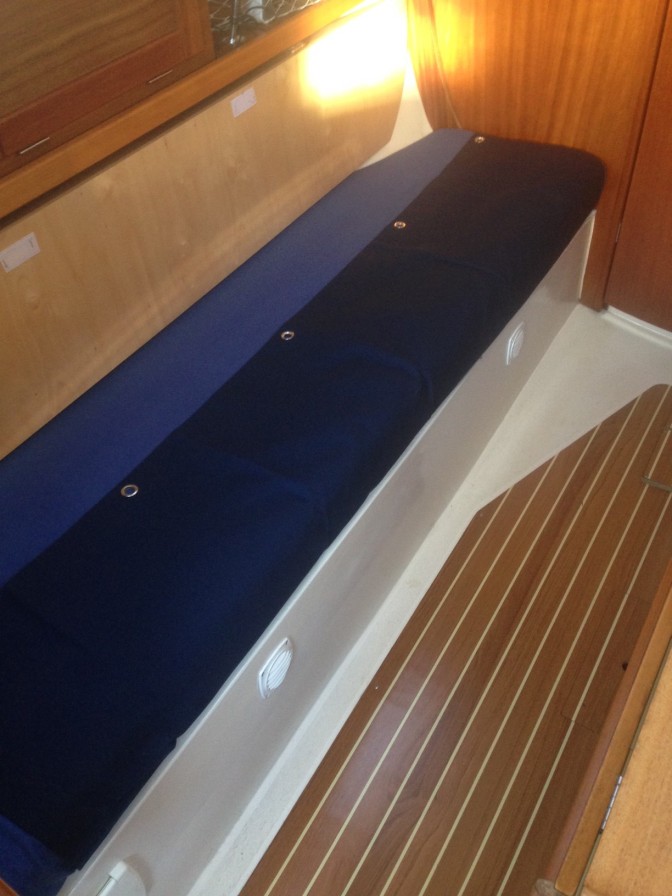 I then needed to work out a fall of lines to hold up the lee cloth from some high point, as well as tying them back at the head end (aft and nearest the viewer in the photographs) to the bulkheads next to the galley and heads respectively. For the high point, I screwed a stainless padeye high on the architrave at the top of the forward bulkhead. Here I came across a bit of a build issue: I fitted the starboard padeye first and fitted it vertically, screwing through the architrave trim and into the bulkhead beneath. When I came to fit the port side one, I found that the architrave trim wasn’t tall enough for the pad-eye to fit! yes, the thing is actually assymetric, being about 2cm wider on the starboard side than the port side. This was probably done in order to account for some inconsistency or other, either in the mould of the deck above (relatively unlikely) or more probably an inconsistency in the shape of the headlining when fitted. Either way, it’s rubbish work on Hanse’s part and does not reflect well on their fit-out standards of fifteen years ago.Here is the padeye on the port side, fitted horizontally rather than vertically like it’s counterpart to starboard. You can see the way in which the trim tapers towards the outboard end.

The lines which hold the leecloths up are simply lengths of 4mm shock cord around 2m long with a 30mm toggle on each end. The first line runs from the second eyelet along from the rear bulkhead, up through the padeye (which is large enough to let a 30mm toggle pass through) and down back to the fourth eyelet along, putting tension on both eyelets and pulling the cloth up. Similarly, the second line runs from the third eyelet, through the pad-eye and back down to the fifth and final eyelet, where it pulls the foot end of the leecloth vertically up, resulting in quite a strong attachment.

This shows the full fall of the vertical lines on the starboard leecloth. 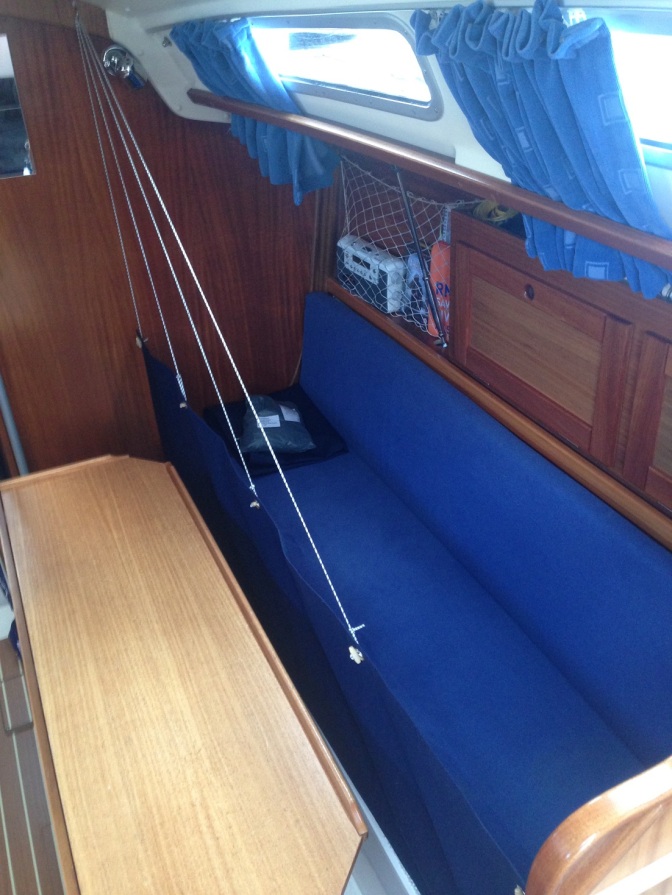 The final job was to tie back the cloth at the head end, via a toggle through the first eyelet and a short piece of shock cord connected to a nylon snap hook which closes onto another pad eye fitted to the bulkhead. This makes a handy ‘gate’ which makes it easy to get in and out of the berth when the cloth is in place.

Here’s the starboard side cloth tied back to the galley bulkhead:

And the port side cloth ties back to a pad eye behind the chart table. If the chart table is up, it’s unlikely that you’d want to use this berth for sleeping, but the tie-back passes easily round the table whether it’s up or down, so the choice is there. 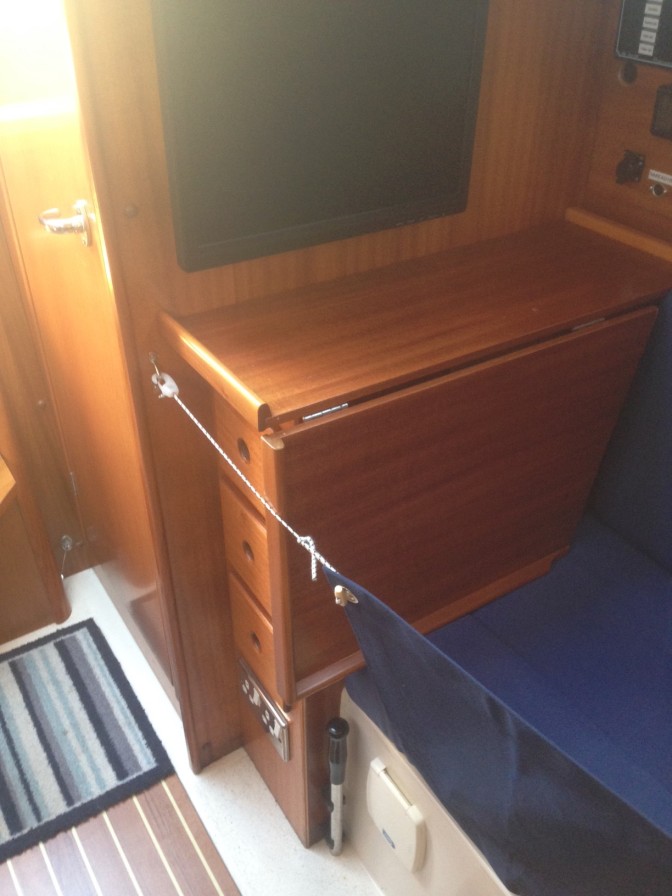 The overall result is quite stable and comfortable, and definitely up to the job of creating a ‘cot’ for use in port and for bag storage at sea etc. It’s been suggested on the Hanse forum to tie back the cloths to the handrail when at sea, rather than the bulkhead padeye- this is a good idea as it will hold a sleeping crew member in the berth more securely, although the reason I didn’t do it is that I think it might make the berths a bit ‘coffin-like’ with the cloth pulled tightly into the berth and so less enticing in port. For use at sea I might also make up an alternative set of lines in non-stretchy cord for the vertical falls which hold the cloth up, to increase the strength and resistance to movement of the cloth when in use. Things like this are asily done for very little cash because the use of toggles means things can be quickly swapped about and the toggles and line are very cheap. I also think the toggles create a pleasingly nautical look!

Here is the final fit of both lee cloths.